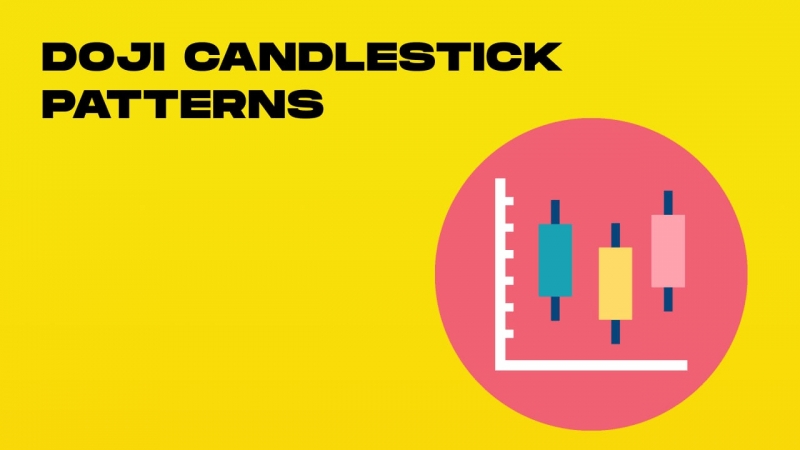 What is a Doji candlestick? Every trader should know what it is. However, if you don't know, this article will explain everything in detail.

Almost from the first days of the stock exchange, no matter whether it is stocks, securities or cryptocurrency, traders have set a goal - to make as much money as possible. In order to make money on the exchange, it is necessary to know whether the price of the selected asset will go up or down in order to profit from its movement.This is what technical analysis was created for. Simply put, it is the study of stock exchange charts in order to determine the movement of exchange rates in one way or another.

Its basic definitions and rules were systematized by John Murphy, the author of one of the most famous books on the topic - "The Technical Analysis of the Futures Markets. Theory and Practice." Murphy writes that its basics can be found in the theory of Charles Dow. Dow is considered the ancestor of technical analysis: he published his ideas about the stock market in a series of articles in the Wall Street Journal in the 1890s. He died in 1902 and never compiled his ideas into a book. Dow's followers collected his ideas and published the books "The Stock Market Barometer" and "Dow Theory."

Technical analysis is the study of the history of prices and trading volumes in order to identify patterns. It predicts future price movements based on historical data.

There are two directions in technical analysis:

And now that we have these definitions figured out, we can say what a Japanese candlestick is. It is one of the most informative chart elements that traders use.

From the name it is easy to guess that these candlesticks come from Japan. Very clever local rice traders used this method already in the 18th century. According to some reports, the first chart in the form of a sequence of "candles" was invented by Homma Munehisa to visualize the value maximum and minimum for a certain period of time, as well as prices at the beginning and end of this period. However, due to the geographical remoteness and closedness of Japan from other countries, this type of chart became popular much later, when stock exchange life was already in full swing in Europe and the USA.

Japanese candle patterns show how the price of the chosen asset changed over a certain period. As mentioned in the rice analogy, this is a visual representation of the first and last price and their upper and lower limits for a certain period.

The candle has a very simple structure - the body and the shadow. A body shows the distance covered by the price of the asset from the opening to the closing of the period, that is, it is the price of first and the last trade. The shadows show the maximum and minimum values of the price during this period.

On the charts, a rising candle is most often colored green. Red doji candle means that the candle is falling. In some variations, green corresponds to black and red to white. However, if you have a trading terminal or a trading platform, you can change these colors as you see fit.

It's time to explain what a Doji candlestick means. This is a candlestick model, which indicates the neutrality of the stock. Market neutrality is a situation where buyers and sellers balance each other out, resulting in no price movement during a particular trading session. The appearance of Doji candlestick patterns means that the forces of buyers and sellers are equal, and at this time the market was in a state of uncertainty.

Recall that the bulls are players in the stock market, whose main goal is to make money on the growth of assets. Bears are their opposite and make their main profit on the falling market.

How can we explain such behaviour in the market? It is quite simple. For example, the market has no big players, which leads it to a certain balance. It is in such cases, on the trading charts, which are studied by adherents of technical analysis, there are Doji candles. This pattern indicates that the market will soon move in one direction or another. However, there are also cases where a Doji candle indicates not the reversal of the trend, but its continuation.

We will explain later how a trader can learn to determine which direction the market will move in, when we proceed to the analysis of each of these patterns. For now, let me remind you that those who are not yet ready for independent trading, can use the strategy of Copy Trading - the ability to copy trades of famous traders. So you will not only make the same profit as they did, but you will also understand what a Doji candlestick means if the selected trader based his strategy on Doji candlesticks.

What does Doji mean? To understand this, we first have to answer another question - what does Doji mean in Japanese? Doji in Japanese means mistake or error, which is why this name was given to a certain type of candlestick pattern, to signify that it is a mistake that traders did not intend to make. This is the essence of trading, because traders always hope that the markets will move up or down, but not stay at one level.

A Doji candlestick always has a very small body. In some cases, the body is simply a horizontal line.

Doji shadows are a bit more complicated. They are subject to the general laws of Japanese candlestick shadows.

For example, a "bullish Doji candle" indicates a bullish trend reversal. If this pattern appears on the chart, the price usually begins to rise after the fall. The same is true for the "bearish Doji candle", which indicates a bearish trend, or a post-breakdown in prices. If you know a bit about technical analysis and can read a chart, you will be able to tell if a Doji is bullish or bearish now.

The main advantage of the Doji candlesticks over other methods of graphical analysis is the most detailed representation of the market situation. The line chart shows only price levels, bar chart - price levels, as well as opening and closing points. In contrast, the candlestick chart model also shows the positions of buyers and sellers.

In contrast to the Point and Figure chart, which is not tied to a time interval, the Doji candlestick chart allows traders to notice every change in the market by any selected time interval.

The colour-coding of various indicators makes the candlestick chart more visual than other types of charts. Therefore, the Doji candlestick indicator can be recommended to novice traders.

When combined with other methods of technical analysis, such as trend lines, moving averages and oscillators, Japanese candlesticks give traders a complete picture of the market situation. The experience of many generations of investors allows us to claim that this method of graphical analysis is the most effective. Doji can also be used in crypto automation, when the trading robot finds a pattern defined for a particular Doji on the chart and makes a decision based on this.

There are different types of Doji candlesticks, each indicating a different market behaviour. Let's consider each of them in detail. 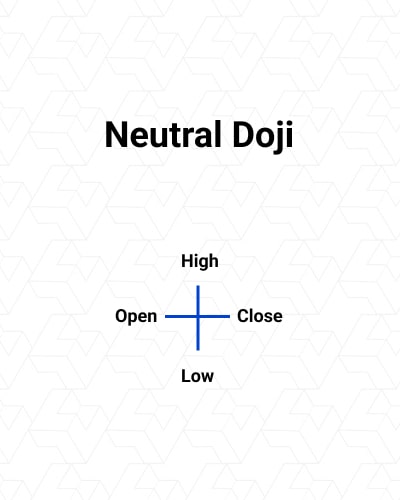 The Neutral Doji, also known as the Doji star candlestick, says that the opening price is equal to the closing price of an asset, which is the essence of this type of candlestick. However, the length of the wicks in this pattern is also the same, both above and below. This indicates that the price movement on both sides of the opening and closing price was also the same. Thus, during this trading session neither "bulls" nor "bears" had a special advantage over each other, as a result, most of the deals compensated each other. This points to the indecision of both. 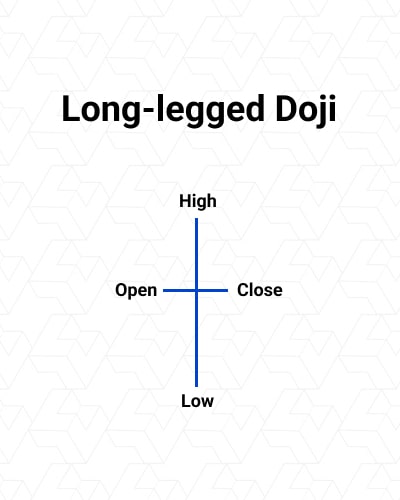 The Long-legged Doji is very similar to the Neutral Doji, but with a long wick on either side of the opening and closing price. This pattern suggests quite a bit of market uncertainty, as the price has been going down and up quite a bit within a period. But after such an extensive movement and a wide range of prices, the result was almost the same level as the opening price. Long-legged Doji candlestick means that supply and demand in the market are currently approaching balance and that a trend reversal may occur in the future. 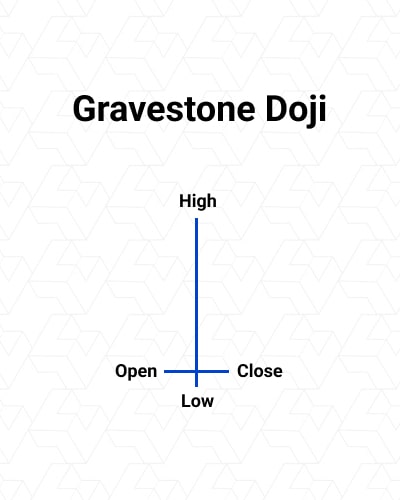 This pattern is formed by a candle that has only the upper shadow. This indicates that the price tried to move higher but failed to do so and closed at a price equal to or slightly different to the opening price. Also, such a candle should have virtually nobody. The gravestone usually indicates that the buyers are losing power because they can no longer drive the price up and the sellers are in control. In most cases, the pattern is a reversal Doji candlestick, which can appear at the end of an uptrend. 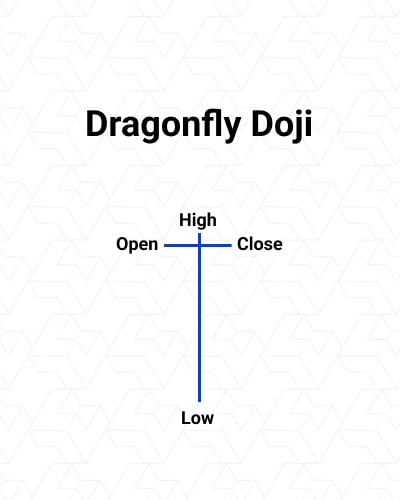 Another Doji reversal pattern is an inverted version of the Tombstone Doji. The Dragonfly Doji candle has a long lower shadow, no or very small body and no upper shadow. Thus, the opening and closing prices of the candle are the same or almost the same. Doji dragonfly is formed at the end of a downtrend and in most cases is taken as a signal of a possible upward price reversal. 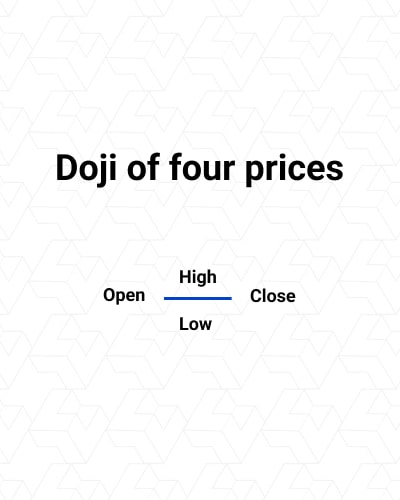 This pattern is extremely rare on the chart and represents a straight line - only the body without shadows. The pattern is formed when all 4 prices are the same- open, close, low and high. This happens either on very low-liquid assets or when volumes drop on the market, for example, during holidays or after the trading sessions are closed.

How to trade using Doji Candles

The classic rules for trading Doji candlesticks were developed decades ago, but they remain effective today. For practical application of these patterns, it is important to learn the basic features of working with them:

Doji candlesticks, when interpreted correctly according to these recommendations, provide 90% stable and accurate signals for opening trade orders. Knowing how to read them can make trading much more successful and reduce the risk of making losing deals. Traders in Japan believe that candlestick analysis, including Doji candlesticks, is a valuable signal for actions aimed at maintaining a deposit or increasing it. Those who know how to analyze Doji will always be able to make money using these signals.

If you want to earn a big profit in trading, always use several instruments for technical analysis, combining them with Doji candlesticks. That way you can achieve much more and succeed in trading.