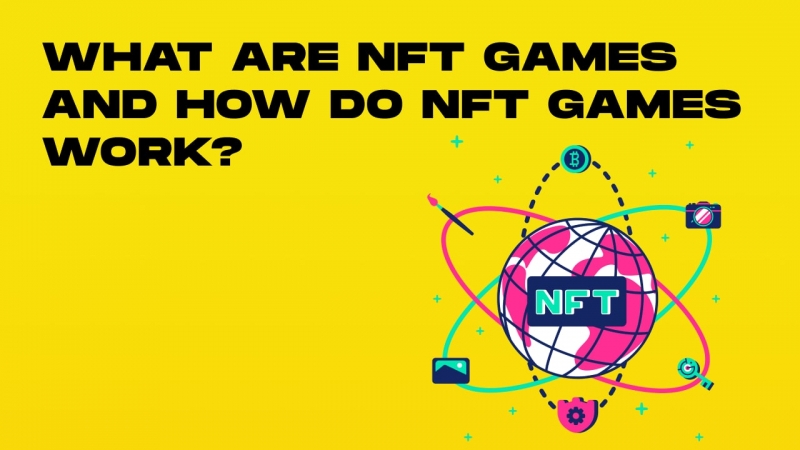 Many companies are thinking about using NFT in games meaning that in-game items, collectables, and other things could be now owned by players indefinitely. How are non-fungible tokens used today and in their future, we discuss this in this article.

Non-fungible tokens overtook the news cycle about a year ago. The craze seemed quite unbelievable with influencers, celebrities, and corporations jumping on the hype train. At some point, the only thing that interested users of the internet were the concept of NFT. Marketplaces started popping out everywhere.

Today, we are much more familiar with NFTs and how they can be used for various practical purposes. So, what is NFT in games? First, we must further discuss the term “non-fungible token” and how they shape our current understanding of digital ownership and speculative trading.

How does an NFT work?

All crypto assets are tokens that are tracked by the ledger. However, these tokens are fungible meaning that they are interchangeable and have identical values. For example, 1 bitcoin is always 1 bitcoin. It can be valued at however many dollars, but its relative value remains the same. While useful for most assets and monetary purposes, this quality completely negates other opportunities for using distributed ledgers.

Non-fungible tokens, as the name suggests, are unique entries that can have distinctly different values. Since each token is unique, you can also have them represent ownership of something. When they are transferred, the ownership of something is transferred as well without any interference from third parties or overseeing organizations. The self-regulatory nature of these assets made them ideal for a wide range of practical applications.

An obvious one is NFT in games meaning the implementation of the technology in various video games where most items are already digital assets and can be tied to a token on a blockchain to provide the ultimate form of ownership to collectors and gamers across the globe.

What are NFTs in gaming?

Most contemporary games that implemented NFTs are pay-to-earn titles and specialized gamified platforms that offer basic gameplay, but primarily focus on facilitating a healthy economy within their eco-system. Promising uses in gaming include metaverses, in-game objects and collectables, and creating unique clans. Some other possible applications are discussed but make little sense.

Tokens can represent all sorts of things that are unique and can be tracked. This concept is what made some companies like Square Enix and Bethesda think about the possible inclusion of blockchain tech in their upcoming titles. Since modern gaming companies already monetize content, they have a natural incentive to explore this particular field more than others. Despite being met with criticism from the gaming community, these companies can see that the future is all about digital ownership!

One of the biggest examples in the P2E (play-to-earn) domain is Axie Infinity, a hugely popular auto-battling game with many collectables that can be used in combat. Axies are unique creatures that have special abilities, stats, and traits that are represented by NFTs and can be traded on various marketplaces where the game is supported. It became incredibly popular in many countries in the SEA region. Philippines, Malaysia, and Taiwan are places where these little pokemon-like monsters are most popular.

One of the issues with the game was the market crash that happened due to issues with the ecosystem and its ability to produce valuables infinitely making it an unsustainable economy. However, the creators quickly solved the issue by imposing some limitations and focusing on strengthening the price of currently circulating tokens.

Many great titles are already available for this genre. While most of them are considered P2E, many simply have ways to monetize in-game items without focusing on rewarding players for the endless grind. Some of them are incredibly competitive environments designed for skilful gamers who want to be the best. Let’s take a closer look at some of the games that you try right now.

Created as a homage to many amazing titles like Magic: The Gathering and Hearthstone, this is an NFT game crypto enthusiasts can stand behind. Here, you take on a role of a god and battle against other players to earn rewards and unlock new cards. The game is focused on creating a competitive environment within which only the best can expect to receive truly great prizes.

To receive NFTs which are called “GODS”, you have to play the game and receive unique cards that can be later included in battle decks. You need very powerful, rare cards to build interesting combinations and decks that yield victories. While it is possible to get them for free by grinding, there is a way to get them from packs that you purchase at a discount.

Cards can be traded on the ImmutableX marketplace. Some cards cost pennies. Rare cards are sold for hundreds of ETH and even more. The market cap of GODS is $9.9 million.

Voxel is a great technology that was once considered an ultimate way for the gaming industry to improve graphics without putting pressure on hardware. While this is not something that concerns developers today, the tech found its unique niche allowing for unorthodox aesthetics and interesting design solutions. Sandbox 3D is a voxel-based title and one of the modern NFT games meaning that it has many unique in-game objects that can be traded or exchanged.

The art style and gameplay resemble Minecraft, but they are many interesting assets that can be used within the game world. It is a metaverse title with great depth and lots of interesting features making it a great environment for exploration and expressing creativity. The market showcases multiple types of NFTs:

You can sell them or use them however you like. Such items give NFT meaning in games and make them interesting to both active players and investors.

If you like great brawlers, this title will be right up your alley. Mechanized machines in fierce combat — this is something many will easily stand behind. Maps and some units are represented by corresponding tokens. Additionally, the game will be using blockchain for some features and has already introduced its white paper explaining its foray into the world of Web3.

There is only a handful of NFTs meaning gaming is the main focus. Some developers do not like focusing on gameplay elements and, instead, work tirelessly on fixing their ecosystems. However, Gala Games decided to take a completely different path and make the game as engaging and addictive as possible before building an infrastructure around it.

Spider Tanks are cool units that also have lots of customization opportunities and interesting solutions for those who enjoy games with good PVP and a noticeable tactical edge.

What does NFT mean in gaming?

This question is what worries many gamers who do not understand the merits of having interesting SaaS games where items can be NFTs. While it is unlikely that the future of this industry will be determined by Web3 alone, missing out on some opportunities and leaving a large audience of supporters hanging is also not the best way to address the issue of companies implementing NFT items into games they are working on.

So, what does NFT stand for in gaming? These tokens can represent a wide range of different things including:

We have endless opportunities to move the industry in a completely new direction where ownership of items is something inherent. At the same time, it would not create any issues for players who do not care much about cosmetics and unique items. Marketplace will be a complimentary service offered as a side dish to the main course.

There is immense potential in the domain of gaming for NFT meaning that the whole audience should be a little bit less skeptical and prepare for the arrival of big sharks to the party.

When it comes to gaming, NFT crypto platforms like OpenSea and ImmutableX focus on the financial aspect of the industry often forgetting that creating games and gamified environments that attract users is more important. Binance has one of the biggest technological infrastructures for games that feature NFTs.

Currently, there are multiple projects in development and several already released titles.

Launchpool is a great way for Binance to expand beyond its current competence to enter a completely new market. Gaming is a very lucrative industry that generates more value and revenue than any other entertainment sector excluding adults.

Should you care about NFTs in games?

While many contemporary players do not see how games can be enriched by NFTs, the inevitable inclusion of Web3 technology in games is on the horizon. Giants like Square Enix have plans to add NFTs and other forms of using blockchain in their upcoming projects. It is hard to imagine a world where other developers won’t at least try to implement such systems in their games.

Pioneers are already here and demonstrate practical use cases that indicate that the industry has more than just promises of a better life and better gaming. There is great potential to completely change the way we see ownership in virtual environments

What is APY in Cryptocurrency

How to use trading bot on Binance