Best Altcoins to Invest in (Bitcoin is Still King) 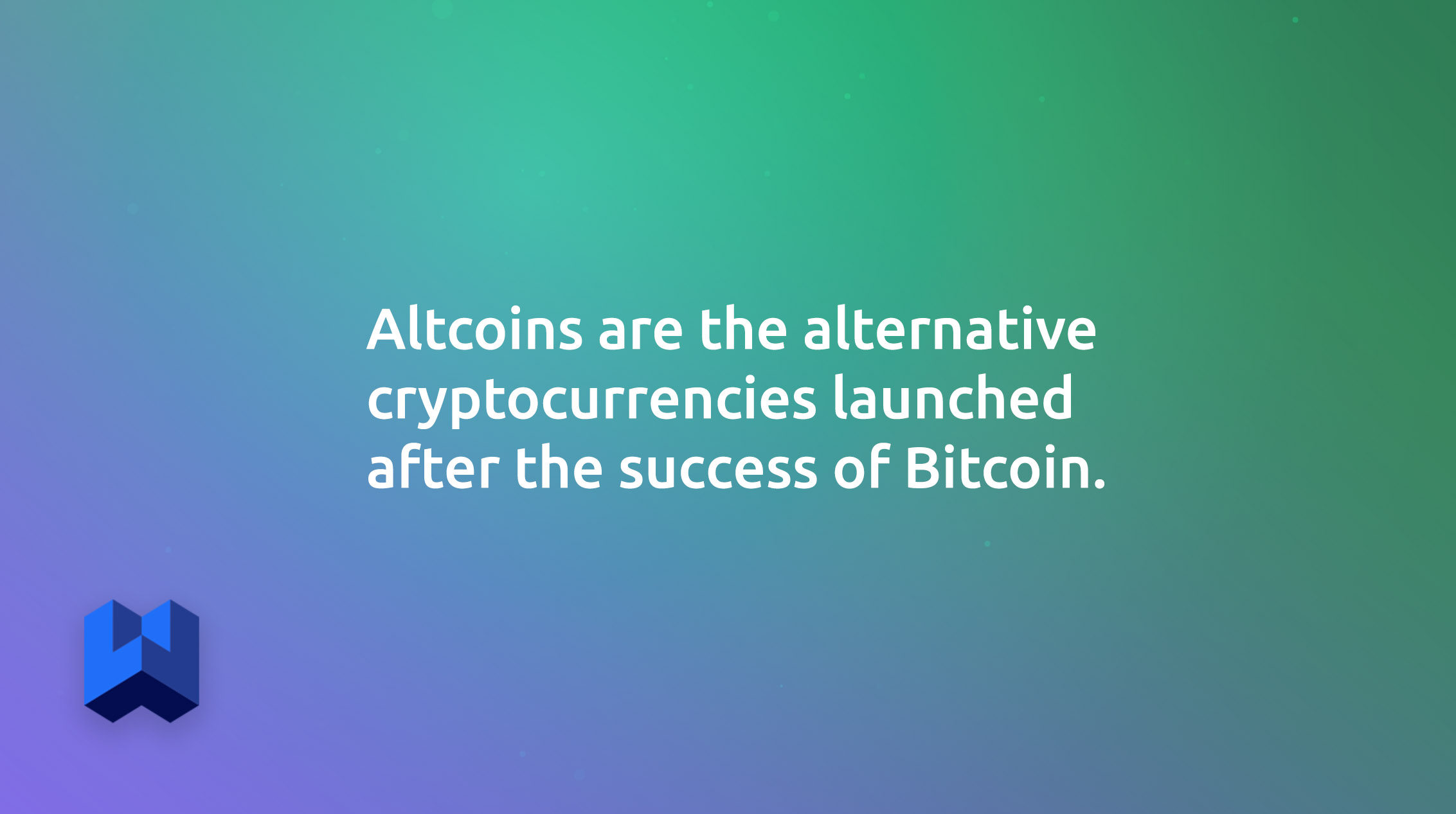 Trying to make sense of altcoins can drive you insane.

As of right now, there are over 2,500 cryptocurrencies for you to keep up with. New cryptos are launched every single day. Each of these coins promises to offer something new and unique. And they all claim to be the next big thing.

To help you keep your sanity, we asked our top crypto experts to fish out the few genuinely important cryptos from a sea of pretenders. Included on the list below are the most influential altcoins on the market today. Read on to find out everything you need to know about cryptocurrencies that are not Bitcoin! 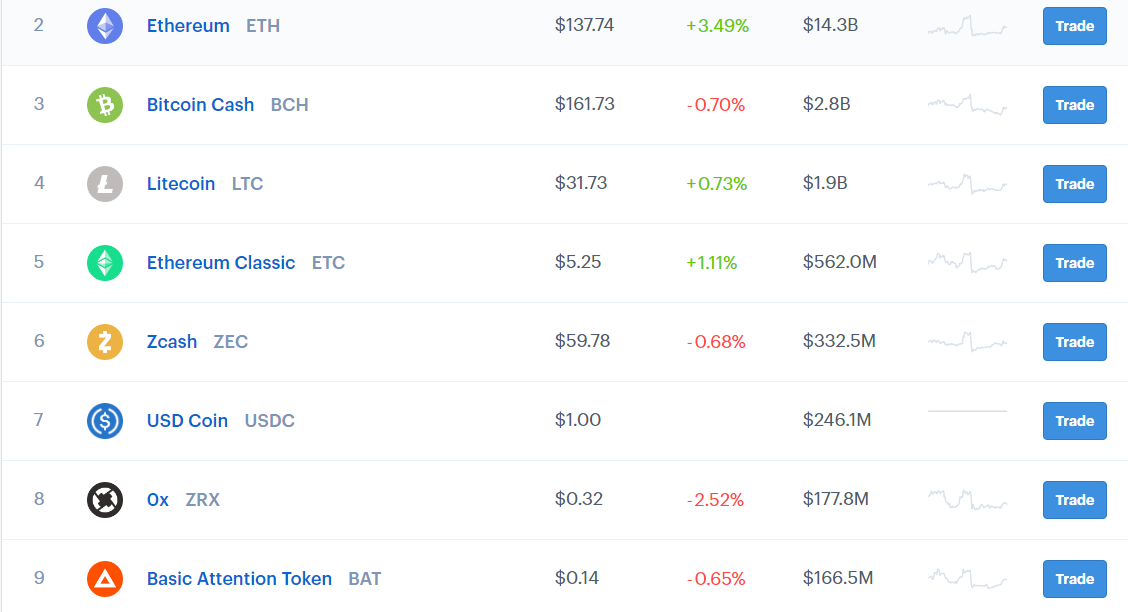 One of the first Bitcoin derivatives, Litecoin is a well-known and respected quantity in the cryptocurrency world. Litecoin differs from Bitcoin in two major ways. The first is its decreased block generation time (2.5 minutes vs Bitcoin’s 10). In theory, this can help it process transactions up to 4 times quicker. The second is the use of scrypt in its proof-of-work system, which makes ASIC mining much less viable.

Released in 2015, ETH was the first major cryptocurrency with native support for smart contracts. Additionally, Ether offers a vastly reduced block time (15 seconds vs 600 seconds in Bitcoin’s case). Like Litecoin, it has measures in place reducing the effectiveness of commercial ASIC mining. Lastly, it offers lower transaction fees when compared to Bitcoin.

Created by two Chinese developers in 2014, NEO acts as both a currency and a system for hosting decentralized apps and smart contracts. The cryptocurrency has the direct backing of the Chinese government. Such internet giants as Alibaba have also invested into it. Unlike Ethereum and Bitcoin, NEO uses the more energy-efficient proof-of-stake mechanism (the benefits of which are touched upon in the entry on Cardano).

While NEO’s popularity is largely concentrated in China, EOS aims to dethrone Ethereum here in the West. EOS has the distinct advantage of offering the functionality of ETH without any transaction fees. Like NEO, EOS operates on a more efficient consensus mechanism than Ethereum’s. In the case of EOS, this mechanism is delegated proof-of-stake. While much more centralized than proof-of-work, this system allows for improved scaling.

Unlike most cryptocurrencies, Ripple is a centralized product developed by a private company. Unlike Bitcoin, Ripple does not aim to be a digital currency. Instead, it is intended to be used as a system for near-instant, low-cost international money transfers between various fiat currencies. Ripple's target audience includes banks and other financial institutions.

Founded by the same person as Ripple, Stellar is similar to it in many ways. Unlike Ripple, Stellar does not target Western financial institutions. Instead, it is meant to be used by private individuals in the developing world.

Launched in 2017, Cardano is a modern, third-generation blockchain. The most vital way in which it differs from Bitcoin is that it works on the proof-of-stake consensus mechanism. In comparison with the mining-based proof-of-work mechanism, proof-of-stake promises to make transactions faster, cheaper, and more energy-efficient.

Launched in late 2016, Zcash is yet another altcoin that places an emphasis on privacy. Unlike Monero and similarly to Dash, Zcash allows its users to choose whether or not they want to make their transactions visible. This allows users to have a record of their transactions. These can act as proof of payment and income during financial audits and similar procedures.

Backed by the United States dollar, Tether is the world’s most popular stablecoin. A stablecoin is a cryptocurrency whose value is tied directly to a traditional fiat currency. In Tether’s case, the value of each of its tokens is equal to one US dollar. Tether Limited achieves this by offering its users the ability to redeem tokens for USD at any time.

Tron is a decentralized, peer-to-peer content-sharing platform running on blockchain technology. Because of this, Tron has a lot more in common with YouTube and Facebook than it does with Bitcoin. The cryptocurrency, TRX, is the method used by the platform to pay content creators for their work.

One of the more unique cryptos on our list, IOTA does not use blockchain technology. Instead, IOTA utilizes the Tangle network. The Tangle operates on a proof-of-work algorithm but does not require any dedicated miners. Whenever you wish to make a transfer, your device performs a proof-of-work calculation. This calculation verifies the two previous transactions in the chain before it. In theory, this system can allow for near-infinite scalability.

Launched in 2015, the coin became famous for introducing a lot of new technology to the crypto world. These include the proof-of-importance algorithm, the Eigentrust++ reputation system, as well as encrypted messaging. A local phenomenon, NEM holds a firm spot as the second most popular cryptocurrency in Japan, but it isn't widely used elsewhere.

Why Bitcoin Is Still King

And yet despite all of this competition, Bitcoin is still the de-facto ruler of the cryptocurrency space. There are several key reasons why this is the case.

Having been the first cryptocurrency on the market, Bitcoin has had a head start on all other coins. This gave its community more time to fix bugs, introduce new features, and address security concerns. All of Bitcoin's advantages and drawbacks are firmly documented and well-understood. Tried and tested, Bitcoin is seen as more trustworthy than the newer coins, the problems in whose design may yet to be discovered.

Bitcoin has by far the largest community of users and developers in the crypto space. This means that the very best technologies introduced by altcoins are often quickly ported over to Bitcoin once they are fully tested. This allows Bitcoin to evolve at a steady pace without taking on any risk associated with emerging systems and technologies.

Unlike some of the coins on this list, Bitcoin is decentralized and isn’t controlled by any company or government. This means that no one can directly influence Bitcoin’s value. It also means that there is no risk of the chain being sold off to another party or disappearing due to a company shut down.

Unlike coins like Monero, Bitcoin is fully traceable and transparent. This is especially good for wealthier users and businesses. This is because proofs of income and payment can be easily produced in the event of a financial audit or similar events.

Lastly, Bitcoin is by far the easiest crypto to use as a currency. It is accepted by a large amount of vendors, both online and offline. The list grows larger every single day. And there exist many middleman services that allow you to pay in Bitcoin to vendors who do not yet support it.